Often, the names used for equipment end up in “you say tomato, I say tomahto” territory.

For example, workers in some industries might use the terms “telehandler” and “forklift” interchangeably, even though they are two different categories of equipment that serve a few of the same functions. 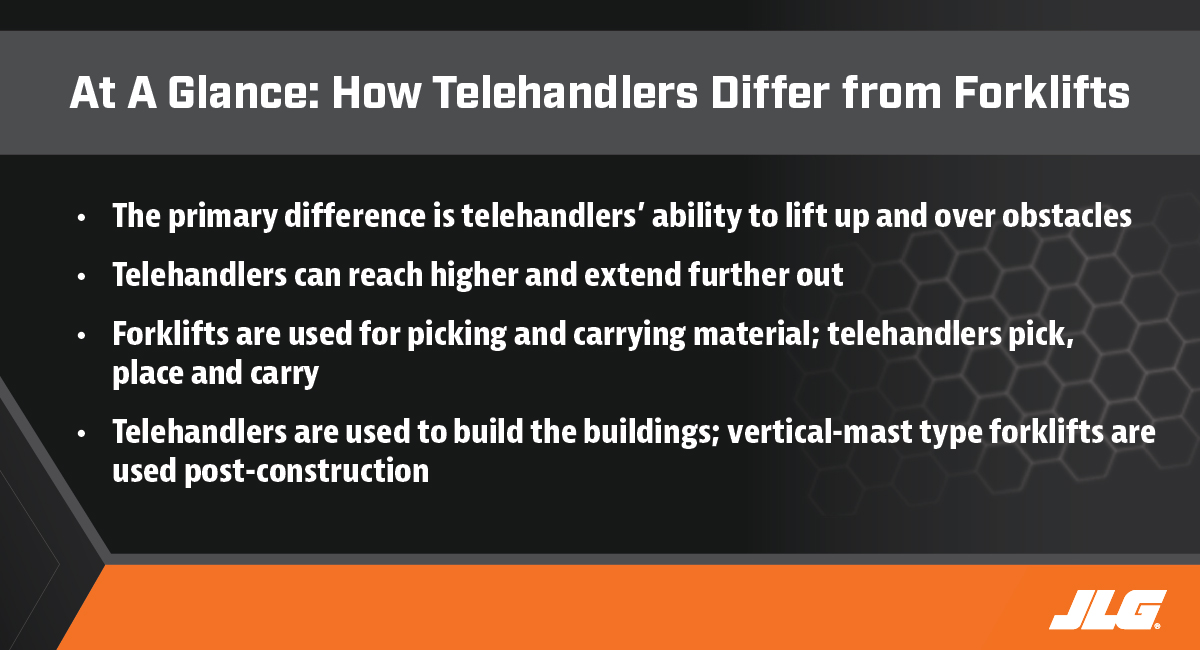 Others would be puzzled that you’d associate a telehandler — typically used on a construction job site — with a forklift, which they picture buzzing around the inside of a warehouse or distribution center.

Part of the confusion arises because of the nomenclature used by the U.S. government. In fact, according to the U.S. Department of Labor’s Occupational Safety & Health Administration (OSHA), telehandlers are forklifts. According to the agency, there are seven classes of forklifts:

Telehandlers fall into Class VII, aka “rough terrain forklift trucks.” Classes I through VI are variations of powered industrial trucks, or ITs, and are generally used indoors.

Within the Class VII rough terrain forklift truck category are:

Vertical mast-type forklifts that are “ruggedly constructed” and “designed to be used primarily outdoors.”
Variable reach-type forklifts have telescoping booms, which enables them “to pick and place loads at various distances and lift heights in front of the machine.” The machines in this subcategory of rough terrain forklift trucks are commonly known as telehandlers.
Truck/trailer-mounted forklifts are portable, self-propelled units typically mounted on carriers to the back of trucks/trailers and used to unload heavy items at job sites. Not all truck/trailer mounted forklifts are rough terrain forklifts.
The equipment within Class VII differs from that in Classes I-VI because the focus in Class VII is on rough terrain. In other words, these machines can be used outdoors or in a combined indoor/outdoor environment.

The forklift type sometimes compared to, or confused, with a telehandler is the rough terrain, vertical mast-type forklift.

The primary difference between a telehandler and the Class VII vertical mast-type forklift is the telehandler’s ability to lift up and over an obstacle. Like the name implies, vertical mast forklifts only lift up vertically. Both types of equipment lift comparable amounts of weight, have similar footprints and turning radii and can use attachments, but only telehandlers have a telescoping boom that reaches up and out or up and over obstacles.

The difference is telehandlers reach higher and extend further out (it is important to note that these machines have a wide variety of capacities and lift heights). That's the advantage. Forklifts are used for picking and carrying material: Picking it up, setting it somewhere else. Telehandlers pick, place and carry.

Another way to think about it is the end-use application. Typically, telehandlers are used on construction job sites, whereas vertical-mast type forklifts would be used inside and outside of a building post-construction. The telehandler is used during construction of the building, and the forklift is used after the fact. Because it lifts up, out and over things, there's an extra layer of versatility versus the vertical mast (forklift).